Do the DM processors or Matrix DSP amplifiers come with a microphone for it’s RTA function?

The DM-608/810 processors and the D-4.800/6.1200 DSP amplifiers do not have a built in microphone since the RTA for these products is built into the DM Smart DSP software. The RTA is analyzing both the inputs and outputs within the processor itself. This enables the user to see what their crossover and EQ adjustments are doing to their output signal in real time. This  is especially helpful for an OEM integration install. Using the RTA, the user will be able to quickly identify band passed outputs from the OEM head unit and to sum inputs accordingly or, adjust for any OEM built in EQ curves.

For example, the screenshot below shows the input RTA reading a substantial EQ bump on the high end and the low mids.

The auto EQ function has been applied to create a relative flat frequency response shown on the output RTA.

Below that shows the EQ curve that has been applied by the Auto-EQ to acheive the flat response. 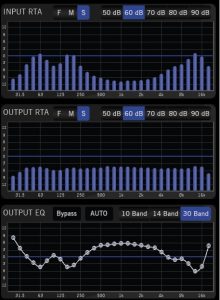 From here, the user can then use a separate RTA microphone to adjust the EQ for the acoustics of the vehicle.

Was this article helpful?