Seattle, WA – November 11th, 2014 – AudioControl has launched its new range of HDBaseT™ extenders to the custom installation market complementing its highly successful audio-video-extender product line-up. AudioControl’s new HDBaseT extender package consists of the HDBT-S1™ Sender and the HDBT-R1™ Receiver, both sold independently or combined into a complete set-package called the HDBT-SR1. All models are available for immediate shipping worldwide. 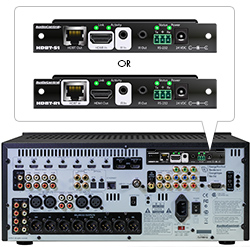 In addition, AudioControl is the first company to offer an optional HDBaseT port factory-upgrade for its highly acclaimed Maestro M8 Surround Sound Processor. The AudioControl Maestro M8 incorporates an expansion port that allows the HDBT-S1 or HDBT-R1 to be optionally factory-installed thereby allowing the system designer or custom integrator the choice on whether to include HDBaseT connectivity, based on
the individual custom requirements of the project.

AudioControl has a reputation for designing, engineering and manufacturing analog, digital and video active signal extenders at its engineering and manufacturing location in the Northwest rainforest just North of Seattle. It’s award winning BVD-20 and BVR-20 remain amongst the most popular audio extenders on the market today transmitting digital and analog video up to 1000 feet over Cat 5 wiring. The
launch of AudioControl’s new HDBaseT extenders is a natural addition in it successful line-up of audio-video Baluns.

Key Features of the HDBT-SR1 System

In addition, all of AudioControl’s HDBaseT extenders and Home Theater products are put through a demanding set of individual tests utilizing test protocols and stringent bit rate and other standards using the latest in 4K testing apparatus from Quantum Data. This ensures that every product that leaves the AudioControl factory in Seattle has a certificate showing full pass rate testing ensuring the highest standards of reliability and pass-rate quality and performance.